How to Draft a Demand Letter 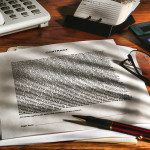 Regardless of whether you or your opponent are interested in settling the case, before proceeding with litigation, always send the defendant a demand letter. Like the name implies, a demand letter is a formal written letter directed to the defendant or defendants outlining the underlying facts of your case, explaining why the law supports your position, and making a demand for the payment of the specific sum of money in exchange for settlement.

One of the most important pieces of advice concerning demand letters is to ALWAYS write them as if they were going to a judge or jury. In other words, make certain that it is well written with no grammatical errors, well organized, and strongly advocates your position in a clear and concise manner. Do NOT send a hand written letter. Your goal is to convince the defendant that settling the case is better than going to trial, and if you sound like you know what you’re doing, you’ll be more likely to get what you want.

A demand letter should not come across as overly aggressive or threatening. You’re not threatening anyone- you’re just stating the facts as persuasively as possible.

Drafting a demand letter is a good idea for another reason. Many small claims courts require the plaintiff to undertake some effort to settle the case before resorting to litigation. Even if the demand isn’t required under your local court rules, judges often ask whether attempts have been made to settle the matter, and will often look more favorably upon a litigant who tried to resolve a matter amicably but was unable to do so.

Drafting a good demand letter is as much art as it is science. Here is the basic format that you should follow:

Opening Paragraph: Always start your with a brief introduction of who you are and the purpose of the letter. It often helps to throw commence your opening sentence with “As you know…” This implies that the defendant is aware of what he or she has done (or didn’t do) that brought you to this point.

Summary: The next few paragraphs should summarize the underlying dispute. If the matter concerns a breach of contract, outline the basic terms of the contract, and attach a copy, if possible. Or, if the case involves personal injury, outline the basic facts of the incident.

Demand: After explaining the facts, you should state your monetary demand in clear terms. Always include a time frame in which the offer must be accepted. Otherwise, the defendant can argue that the offer is open indefinitely, and attempt to accept it after you’ve invested more time and effort into the matter.

Consequences: Conclude your demand letter with an explanation of the consequences of their failure to accept the proposed settlement (i.e., you’ll take them to court).

Closing: Close with a sentence or two that advises the defendant how you expect them to proceed.

Here is a sample demand letter for use in a breach of contract case that puts this guidance into perspective:

INTRODUCTION
I am president of Saddleback Widgets, Inc. (“Saddleback”). I write in regard to your company’s failure to fully and timely pay all amounts due for new widgets purchased from Saddleback under the terms of the written agreement between your company and Saddleback dated August 29th, 2013.   As you know, that agreement requires you to pay Saddleback $1.00 per widget, in addition to delivery fees and taxes.

SUMMARY
As of the date of this letter, we have delivered a total of 5,000 widgets, which results in a balance due of $5,000, plus $300 in deliver fees. However, as of this date, we have only received payment in the amount of $1,300, despite our frequent demands for payment in full. This results in an amount due of $4,000. For ease of reference, I have attached a copy of the Agreement, together with copies of the invoices that set forth the amounts due.

The written contract, together with your acceptance of the delivered goods, serves as irrefutable evidence that the outstanding balance and is both valid and unpaid. Unless we can resolve this matter amicably, I will have no choice but to initiate legal action against your company to collect the amounts rightfully due to us.

DEMAND
However, notwithstanding the above, our preference is to resolve this matter amicably, and we are willing to forgo the delivery fees we are owed in order to achieve this result. Accordingly, we will forego undertaking legal action if you pay us the sum of $3,700 on or before Wednesday, March 19th, 2014.

CONSEQUENCES
Be advised that immediate payment would be in your best interest, as it allows you to avoid costly litigation, travel expenses, an injunction, and the creation of a public record of a judgment against your company and you personally.

CLOSING
We look forward to your prompt response and attention to this matter. We will deem no response as an indication that you prefer litigation to a complete, open and honest discussion of this matter.